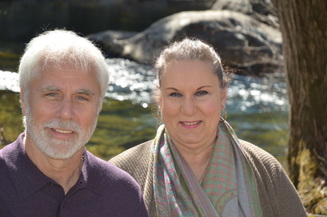 Angela Zeiss is a North Carolina licensed wildlife rehabilitator. She and Keith Gilbert took in their first orphaned  fawn when a neighbor brought one to them after its mother had given birth to twins and then been chased away by a dog with only the older twin following. The younger one was too small to follow and had not even had any colostrum from her mother. The neighbor had hoped the doe would come back for her baby but after several hours it became apparent that she wouldn't.

Angela and Keith immediately called in their vet. They had a window of four to five hours from birth to get the colostrum into the baby or she would not survive. Unlike the stories of many orphaned fawns, this one has a happy ending. That baby, now a mother herself, brings her own babies back to visit Angela and Keith. She has had three babies that they know of.

Since that time, Angela and Keith have fostered approximately 100 fawns, at a cost of about $1000 each. They have also committed to providing lifelong care for the fawns they raise who, because of physical deformities or blindness, cannot be returned to the wild.

We hope you will consider making a donation to help pay for the feeding and care of the orphaned fawns and injured deer that will be brought to us in the coming year.

We are happy to be able to keep you up to date on new arrivals, releases, and those who come back for a visit, through this web site and our Facebook page.
Powered by